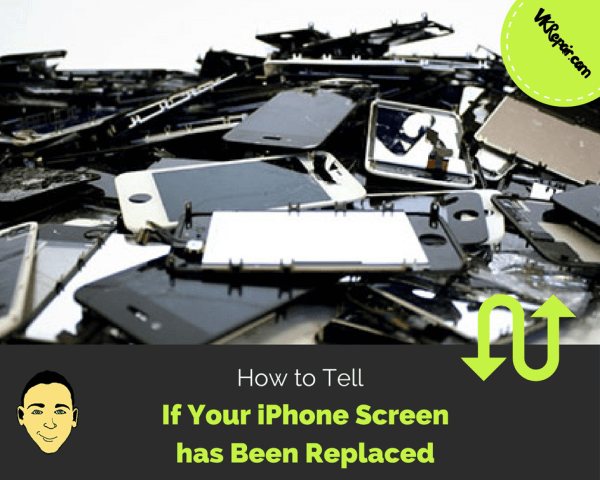 How To Tell If Your iPhone’s Screen Has Been Replaced

There’s nothing worse than having a damaged iPhone screen. Unfortunately, iPhones are not indestructible and a broken screen is a very common occurrence. Repeated wear and tear can cause small fractures to form in the glass, and over time they can worsen, leading to a larger crack that renders the phone unusable.

At this point you’ll have two options: you can either purchase an entirely new phone, or have your screen totally replaced (by a professional or yourself). Getting a replacement screen is usually a much cheaper option, but you’ll want to be sure that the parts you receive are genuine. If you are currently using an iPhone that wasn’t purchased from Apple, you may be using a screen that is not genuine without realizing it.

To the untrained eye, it can be difficult to determine the difference between OEM (original equipment manufacturer) parts and cheaper, poorly made copies. Luckily, there are a number of indicators that can tip you off quickly as to whether or not your screen has been replaced. While taking apart your phone is not recommended, you’ll have to closely examine some of the internal components as well as the glass itself in order to determine if your parts are original.

Lastly, there should be a laser mark on the front camera’s retaining bracket. If there is a laser mark, you’ll notice a blue layer film reflected when you hold your iPhone under the light. It is worth noting that taking apart your iPhone apart is not recommended, and that it should be done by a professional.

The integrity of the flex cables on your iPhone may offer some clues as to whether or not the screen has been replaced. OEM cables tend to be very flexible and soft to ensure that they don’t get damaged while being installed. They must be folded several times to fit inside the iPhone properly and, as a result, cost more to make.

If it’s a genuine part, the digitizer’s flex cable should be soft and easy to fold between two fingers. However, the LCD’s cable will be slightly more rigid, as it doesn’t need to be folded over as many times during the phone’s assembly.

You can easily tell if your phone’s screen has been replaced by checking the brightness. OEM LCD screens are usually much brighter. Fake or replacement screens can sometimes have a dullness in color and still appear dark even when the brightness is turned all the way up. 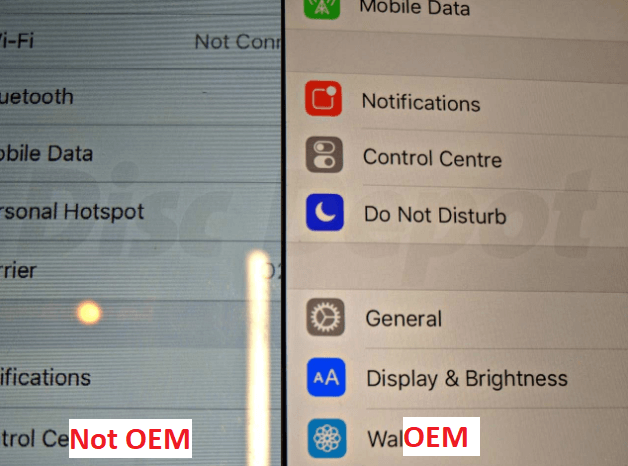 The best way to test this is by doing a side-by-side comparison to another phone that you know has an original factory screen. Turn up the brightness on both phones, and the difference will be very apparent.

Another subtle difference is that the edges of the glass will be much smoother on an original Apple part than on a copy or replacement. Recycled or copied parts may fit a bit less snugly into the iPhone’s frame, making the edges feel rough or uneven. Replacement screens tend to be slightly larger than OEM parts, making them sit a bit off center.

When a screen is replaced, it typically does not sit perfectly on the bezel. This is due to being drop and corners/ edges being dinged up. The new screen will not sit flush against the bezel.

The surface of the glass is also a pretty good indicator of a replacement screen that is not genuine. Original Apple screens have a special coating on them that make them hydrophobic. Water should slide right off of the screen without collecting on the surface or leaving any residue behind.

Considering the high cost of manufacturing glass that is water-resistant, many third-party factories are unwilling to provide this same level of quality. A replacement screen will usually have droplets or streaks left on it after water is applied. It is worth noting that some factories have begun applying cheaper coatings to simulate hydrophobic material, but there are still many aftermarket screens that continue to collect water.

If you feel that your iPhone has been fitted with a replacement screen and aren’t comfortable disassembling it, you should take to the nearest Apple store or send it back to the factory. A replacement screen will work for a short time, but they are not as well made as OEM screens.

Replacements are much more susceptible to damage, and tend to be less responsive overall. It may cost a bit more, but sticking to genuine Apple parts when in need of a repair is always a better choice.

However due note, Apple will not fix your iPhone if you had someone else swap out the screen. Non-OEM screens are not as great as the real thing, but they are getting closer and closer to the real thing. It is becoming hard to notice a difference lately, apart from the missing Apple logo.

Hopefully this has helped how to tell if iPhone screen has been replaced and whether or not it makes a difference.