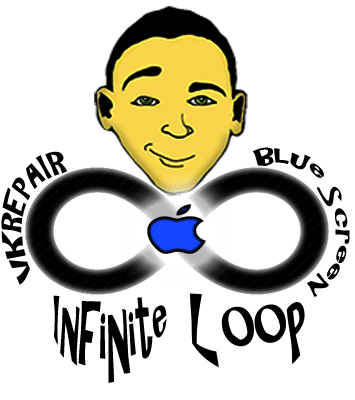 A problem with the iPhone 5S that has been popping up on help forums is a problem with it rebooting itself continuously. Just before the iPhone restarts itself, it flashes a blue screen.

The iPhone 5S blue screen issue can happen after such occurrences as an update, jailbreak, screen replacement, restore and even an upgrade to a previous version. It is referred to as an “Infinite Reboot Loop”, “Blue Screen of Death”, and “Boot Loop”.

iPhone 5S is shown rebooting itself with a blue screen.

In this tutorial I will guide you through the steps needed to trouble shoot and fix the iPhone 5S Blue screen problem. This tutorial mainly focuses on two main culprits of the blue screen; screen replacement. However if you do not get a blue screen, then there are software problems, which I cover as well.

Getting the iPhone 5S Blue Screen After Screen Replacement

From my research, the iPhone 5s blue screen of death typically occurs when someone tries to replace the screen. Therefore lets begin with some fixes if you have replaced the screen. A wide range of issues can occur when one swaps out the screen on an iPhone. However the main cause is a damaged motherboard from putting in the wrong screws. The iPhone may still work if you fix the issue. 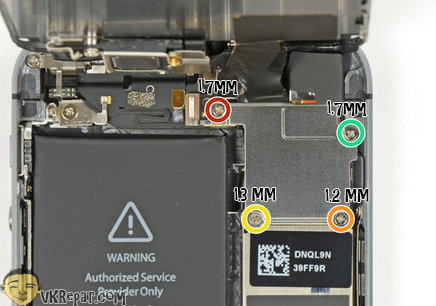 On the iPhone 5s, make sure your screws are in the right spots. Two of the top philips screws are the same.

First of, make sure that all the screws are in the right place as shown above. This is important! They are different size for a reason. You might have mixed them up, causing a short or bad contact with the motherboard. When you remove the screws, double check that none of the holes look damaged. Mixing up the screws is usually the main culprit of the blue screen of death. These act as contact points. If you need replacement screws, you can buy them here.

Quick note: I have heard people not putting back the 1.2MM Phillips screw to make the loop stop. So this is also worth a try. 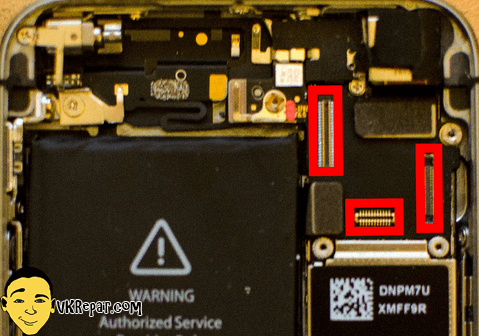 These are the LCD and Digitizer connection ports on the iPhone 5S.

If you are sure the screws are in the right spot, move onto the replacement screen. It is easy to damage the ribbons or the connections on these.  An easy way to tell if you have damaged the new screen is to swap it out with the old one. As long as you are sure the cables are not broken or damaged, you can still test with it.

If they are damaged on the iPhone 5S motherboard, your iPhone is beyond repair. Fixing anything on the motherboard itself requires someone with experience and knowledge and I would not recommend it. However if you do have some experience, the video below will show you how to do it.

After that is checked, put the old screen back on and make sure the connections are firmly in. The screws should go into their right place, and DO NOT over tighten as this may be the reason for the blue screen itself.

Power it back up and see if you get the iPhone 5S boot loop. If you do not, then the issue is with the replacement screen. If you get stuck with the blue screen, it is not the screen. Go ahead and swap the screens out again with the replacement and check again. If you have made sure all the connections are firmly in, the connection ports are not damaged, and the screws are in the right place, this might be a software issue. 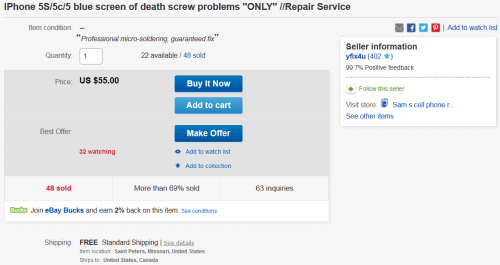 If you have determined that the blue screen is caused by damage to the motherboard, I recommend having a professional fix it. Check this service out.

Here is a quick tip: If your original screen is very damaged or does not even display anything, you can still use it to test the blue screen problem! As long as the cables are not damaged you can still use it to trouble shoot. Lets take a screen that shows no display for this example. After you connect everything, power the iPhone 5S back up.  Wait a couple minutes and press the lock button. Did you hear the locking sound (make sure volume is up and not muted)? If you did, the iPhone 5S has booted back up fine! You can also power it on and connect it to your computer. If it connects fine and stays connected to itunes, then it has booted up.

I have seen some people talk about replacing the battery. If you have not messed around with the iPhone battery, then this should really not be the case. Personally, I have never seen a blue screen come up due to a bad battery or a bad replacement job. If you did replace the battery, unsolder it, and plug the phone into a charger. See if it loops around when it is plugged in to determine if the battery is at fault or not.

Another issue that could have occurred during the screen replacement was that you have damaged the camera cable. To troubleshoot this, unplug the camera and start the iPhone without it plugged in.

If you have not replaced your screen, or the steps above did not work, you might be dealing with a software issue in the iPhone 5S. There are a few thing that you can try to get your phone from looping in circles. A lot of small software changes could have caused the iPhone 5S to malfunction, causing it to have a hard time booting up since the software is no longer stable.

Have you jail broken your iPhone? If so, something might have happen to the operating system. Also any packages you may download may cause a conflict in the iPhone’s start up.

Before you try to restore your iPhone 5S completely, try the following:

Some users have reported this to work, especially if you have jailbroken your iPhone. This fix is more geared for just the iPhone 5S infinite boot loop then the blue screen issue.

If that didn’t work, you may have to reinstall the iOS on the device completely. To do this;